Home » Anova Precision Cooker vs. Joule Sous Vide By ChefSteps
Best Sous Vide Brands is a community-supported website. We may earn a small commission on purchases made through our links. Learn more.

You love your newly found professional-chef prowess. You’ve turned out dish after dish of exquisitely cooked meals: the perfect steak; the tenderest chicken breasts; the juiciest pork chops. You have become hooked on Sous Vide cooking. Pretty soon you're going to be asking this question; “When it comes to immersion circulators, Anova vs Joule, who wins”?

Specs At A Glance

Ever since the cooking method was popularised by TV cooking shows, it has become a hit with ambitious home cooks. The reason is attributable to its main characteristic feature – sous vide has the ability to maintain a constant, even, precisely-controlled temperature. This allows just about anyone to turn out perfectly done meals every time, without worrying about overcooking.  The sous vide equipment of choice for home kitchens is the immersion circulator.

Immersion circulators are handy devices that are immersed in a water-filled container to heat and circulate the water to maintain an even temperature while cooking food sealed in vacuum bags. While there are other devices for sous vide, like the sous vide water oven, Immersion circulators are great for home use due to their compactness, ease-of-use, affordability, and precision.

Anova vs. Joule: So Who Wins?

However, there are so many models out there that choosing the right immersion circulator can be a bit challenging. The Anova Precision Cooker and the ChefSteps Joule devices are some of the more popular ones.

But which of the two delivers more bang for the buck?

Which serves up a tastier steak?

To help you decide, we have taken the time to test the two devices and pit them one against the other, head to head; Joule vs. Anova? Let the battle begin…

We looked at their aesthetics, functionality, ease-of-use, storage, affordability, and performance.

Compared to the Joule, the Anova, finished in black and stainless steel, is large at 14.75 inches long and 2.5 pounds. Its larger size allows an LCD screen and a scroll wheel to be fitted in. And you can use the wheel to directly control the unit without the help of an app.

The Joule is sleek and small, measuring only 11 inches long and weighing 1.3 pounds. The small size means it occupies less space on your countertop and stores easily in the kitchen drawer when not in use. This comes at the expense of some onboard functionality as the only control on the unit is a small silver button to turn it on and off. It can only be operated from the Joule’s app.

The Joule and Anova machines both feature sturdy clips to attach them securely to the side of the water bath container. But the Joule raises the bar a notch with an innovative magnetic bottom that lets you stick it upright in the middle of a pot – of course, the pot has to be made of magnetic material, like cast iron or steel. With a magnetic base and a versatile clip, Joule can attach to almost any container, from a small saucepan to a cooler.

Rating: The Joule’s sleek design makes it look high-tech and easier to store and carry around. And we just love the magnet at the bottom which works especially well if the pot is not too deep. But the Anova balances out with its onboard controls that ensure you don’t have to rely on a smartphone to cook. After all, it’s not everyone that has a smartphone.

Both the Joule and the Anova have Wi-Fi connectivity. Thus, they can be connected to your Wi-Fi network and controlled from your smartphone app from just about anywhere. While this feature doesn’t prepare a water bath, or spice and bag the food, it conveniently allows you to monitor and control the devices remotely, even when you are far from home.

The Joule and the Anova apps both are iOS and Android compatible. They offer push notifications to conveniently let you know when your water gets to the desired temperature, when the temperature falls below acceptable levels, or when your cook time is exhausted. Additionally, the apps contain recipes and also guide you through the cooking process. 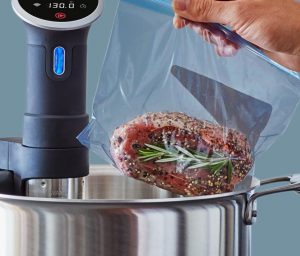 Cooking Steak With the Anova. Delicious!

With the Joule lacking any control on its smooth sleek body, the core of its controls is in the app. This is where you set temperature and cook-time based on recipes.

Interestingly, the Joule app features a “visual doneness” scale which lets you cook food based on how you want it to look instead of using words. For instance, you can cook an egg to be “Watery Walt”, “Fudgy Fred” and “Even Fudgier Francesca” – based on the accompanying pictures on the app.

We love the how-to videos in the app that ChefSteps uses to guide you through the sous vide process: seasoning food and sealing in plastic bags, deciding the temperature to set your water to cook food to your desired doneness, and other processes. You’ll easily follow the app recipes with these videos and perfect your sous vide skills in no time.

However, not all the fantastic recipes perfected by ChefSteps can be found in the app. To get every single one of these drool-inspiring recipes, you will have to visit the ChefSteps site. This totally makes sense since ChefSteps frequently releases new sous vide recipes.

The Anova app is also well designed, although you can cook delicious sous vide meals without opening it. The app is packed with recipes and time and temperature guides for different foods, with many of the recipes from their partnership with the cooking website SeriousEats.com.

Rating: the Joule app is as cool as the Joule device with its rich visual content and appeal. It is the go-to app if you are new to sous vide and its intuitiveness will let you create delicious dishes like a pro in no time.

While the Anova’s app contains lots of pictures in its guides and recipes, the lack of videos to accompany each recipe makes it a little bit less appealing.

From David and Goliath, we learned that small might not necessarily mean weak. The joule packs quite a punch despite its small size. The extra 300 watts of power over the Anova means it pre-heats the water almost twice as fast. However, the Anova can heat water 16 degrees hotter.

The Joule is equipped with a powerful circulator which turns over 10 gallons of water. This helps to maintain an even water temperature no matter the quantity of food. The circulator draws in water from the base and pumps it out from a hole above. This bit of innovation allows the Joule to be used in just 1.5 inches of water. This translates to better versatility as any container can serve as a water bath for the Joule.

The Anova, however, can circulate a decent 8 gallons of water with a minimum immersion depth of 2.5 inches.

For cooking, both the Anova and Joule produced equally excellent results. Cuts of meat were cooked to the expected doneness based on set temperatures from recipes – and they tasted delicious. They both maintained a steady water temperature while cooking with a maximum variance in the set and the actual temperature of only 0.5 degrees Fahrenheit.

Rating: both the Anova and Joule cooked equally tasty food done to perfection.

There are other features included in the Anova and Joule devices that make for greater sous vide experience.

Rating: the Joule wins with its integration with Alexa. Using voice commands to cook is the future of the smart-home kitchen and Joule has wisely keyed into the technology. This will further increase their appeal with people who are already enjoying the convenience of Amazon’s Alexa

Joule vs. Anova: Our Winner Is…

The Anova and Joule Immersion circulators are both great sous vide devices. They both look good, hold water at a steady and even temperature, and produce exquisitely cooked food. They equally have well-designed apps with step by step instruction that help rookies get their sous vide game on.

However, even when the bests go toe to toe, a winner eventually must emerge.

We chose the Joule. The conspicuous absence of controls on the body of the device might be a turn-off for some people, we know. But the Joule is altogether an impressive device.

It wasn’t an easy verdict, but what pushed the Joule ahead of Anova is its state-of-the-art, ultra-modern feel. This is ably captured in the Alexa Integration, sleek compact body, innovative magnetic bottom and media-rich app. With its magnetic base and a nifty clip, the Joule can be attached to just about any vessel, from a small saucepan to a cooler.

It’s easy to forgive ChefSteps for purging the otherwise perfect joule of any controls. After all, most people are always on their phones. So it wouldn’t be much of a stretch if you depend on your phone to control the Joule since it is almost always handy.

If you’re a smart-home technology enthusiast as well as a wannabe star chef, the Joule Immersion Circulator is just the right product for you.

Anova Immersion Circulator Wins For The Rest Of The World

However, if you live outside the US based power system then the Anova will be your go to machine as it has a version that can be used in any power outlet.

Our Number One Choice Worldwide

Join Us On Social Media

“We are a participant in the Amazon Services LLC Associates Program, an affiliate advertising program designed to provide a means for us to earn fees by linking to Amazon.com and affiliated sites.”

Amazon, the Amazon logo, MYHABIT, and the MYHABIT logo are trademarks of Amazon.com, Inc. or its affiliates.